The Agony of Patients with Chronic Conditions

The lack of essential medicines and treatments for chronic diseases1 is, according to Venezuelan organizations, tantamount to "a death sentence" for those living with such conditions2. The shortages are even more worrying if one takes into account that cardiovascular diseases, cancer and diabetes were, according to the last published official data, the three main causes of death in Venezuela3.

According to the WHO, chronic diseases are those of long duration and generally slow progression. Heart disease, strokes, cancer, respiratory diseases and diabetes are the main causes of mortality in the world; they are responsible for 63% of the deaths. See: http://www.who.int/topics/noncommunicable_diseases/en/
On 8 February 2018 several civil society organizations called for a IV Assembly on the Right to Health and Life and demanded that the government adopt urgent measures to treat preventable deaths. See: https://www.accionsolidaria.info/website/sentenciados-a-muerte-por-la-emergencia-humanitaria/ [in Spanish only].
República Bolivariana de Venezuela, Anuario de Mortalidad, 2013 (Bolivarian Republic of Venezuela: Annual Mortality Report, 2013).

In August 2017, the Venezuelan Nephrology Society issued a public statement condemning the extreme lack of resources for treating patients in the dialysis units, the closure of peritoneal dialysis programmes and procurement of organs at the national level, as well as the danger faced by transplant patients due to the shortage of immunosuppressant drugs to prevent organ rejection4. 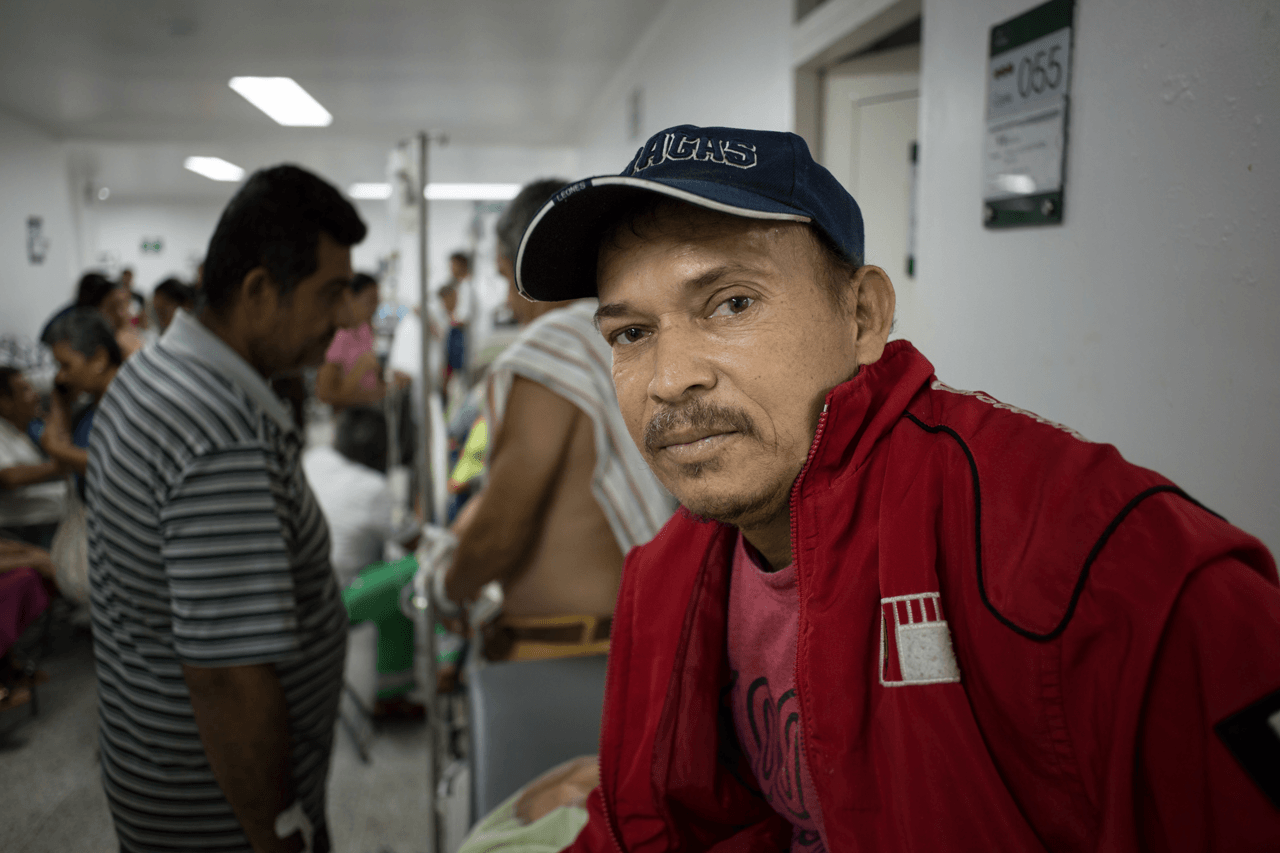 Jorge Mora, 49, from Barquisimeto, Lara State, after 5 days of hospitalization at the Erasmo Meoz Hospital in Cúcuta. In October 2017 he was diagnosed with kidney failure and anemia. Fortunately, the company he worked for paid for the cost of his exams, but the hospital was unable to perform the iron infusion (intravenous iron) nor the dialysis he needs twice a week because the dialysis units in Barquisimeto were inoperative and had no infusion supplies. Jorge said he was aware that if he didn't get treatment, he would die. In Colombia he was able to receive intravenous iron, but not dialysis, because that treatment was not given as an emergency, which is the only legally guaranteed health service given to foreigners in Colombia.

The lack of essential medicines and medical equipment for chronically and terminally ill patients in Venezuela puts thousands of people at risk of having their treatments altered, being given lower doses, having medication stopped for certain periods of time, or, when they are completely unable to access the necessary medication, resorting to home remediesXII. Such alterations are dangerous since they aggravate people's state of health and in the case of patients living with HIV may even result in resistance to the medication when treatment resumesXIII. Civil society organizations reported to the IACHR that around 3 million people with chronic conditions would have spent at least one year without receiving any treatment in VenezuelaXIV. 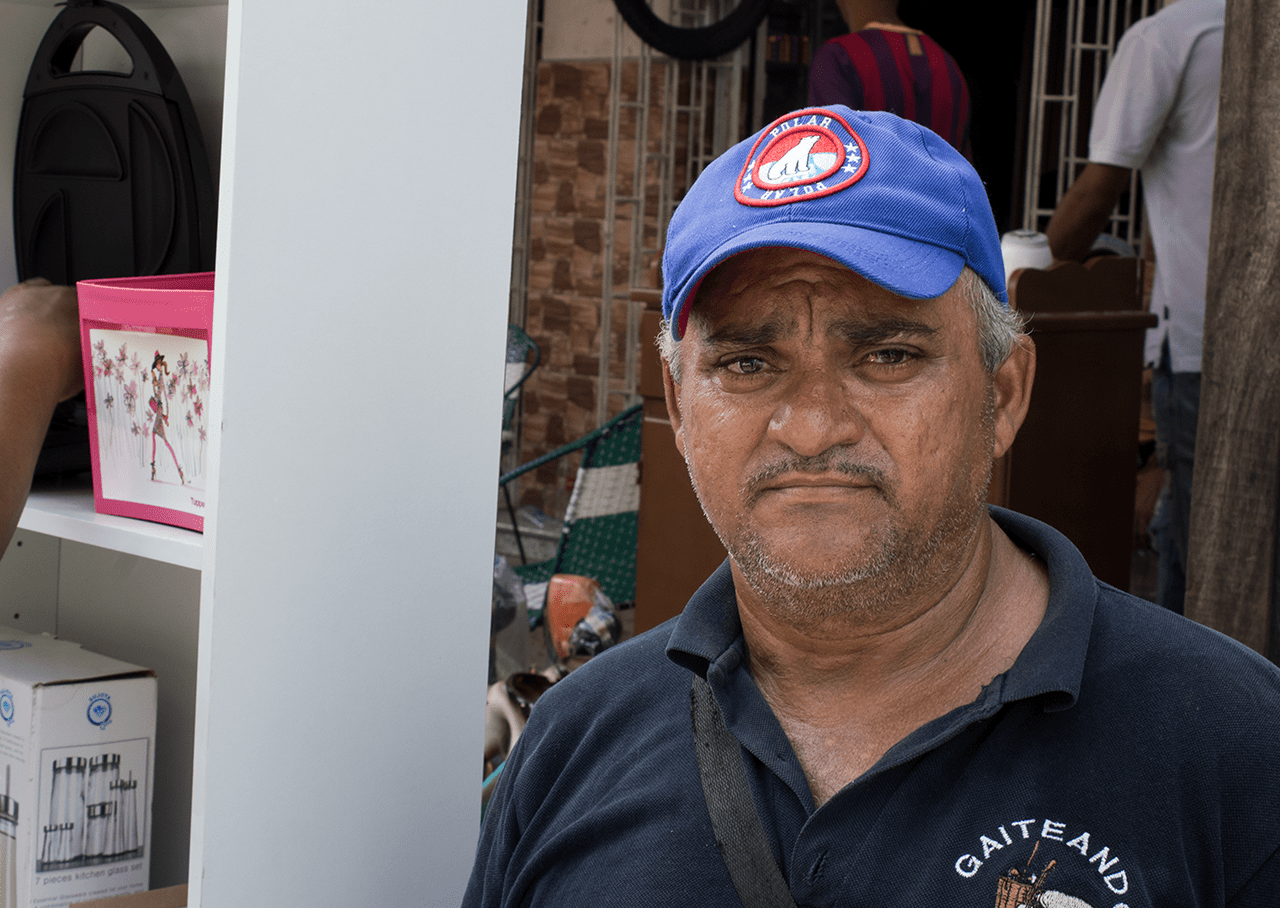 José Ángel Parra, interviewed in Maicao, la Guajira. He is one of the person moving between Colombia and Venezuela in a "pendular migration”. José tries to sell in Colombia the few things he has left in Venezuela. He explains that he barely has enough to feed his family, and that he suffers from leukemia. He has been without treatment for 4 months, due to the fact that in the General Hospital of South Maracaibo, where he used to get it, it has not been available for. He said that the medicine he needs is virtually impossible to get, and if he finds it, it is too expensive. This is why he treats his leukemia with soursop leaf teas.

The Venezuelan Anti-Cancer Society in collaboration with the Centre for Statistics and Mathematical Software of the Universidad Simón Bolívar (CeSMA), estimated that cancer accounted for 25,574 deaths in the country in 2016 and that 51,975 people were suffering from the disease5. In 2013, the date of the last mortality yearbook published by the Venezuelan government, 23,121 deaths of cancer sufferers were recorded, indicating an 11% increase in such deaths between 2013 and 20166.

Currently in Venezuela there are over 4,900 people with bleeding disorders, of whom more than 2,100 have haemophilia A, more than 570 have haemophilia B, and more than 1,040 have Von Willebrand disease 7. Around 1,100 people have other kinds of bleeding disorders. Organizations such as the Venezuelan Association for Haemophilia have spent years highlighting the shortage of clotting factors 8, mainly factors VII, VIII and IX that allow blood to coagulate. The resulting lack of treatment led to the deaths of least 22 haemophiliacs in the country between 2016 and 20179.

Venezuelan Anti-Cancer Society (Sociedad Anticancerosa de Venezuela) “Cáncer Venezuela” (“Cancer in Venezuela”) at: https://www.sociedadanticancerosa.org/educacion-y-prevencion/digitales/ [in Spanish only].
República Bolivariana de Venezuela Anuario de Mortalidad, 2013. (Bolivarian Republic of Venezuela: Annual Mortality Report, 2013).
IACHR, Precautionary Measure 309-17, at: http://www.oas.org/es/cidh/decisiones/pdf/2017/37-17MC309-17-VE.pdf [in Spanish only]
The process of blood clotting involves platelets and proteins called "clotting factors". When the blood vessels are injured, platelets move to the damaged area to clot over the injury and stop the bleeding. Clotting factors are needed in order for the clot is to be firm and stable.
PROVEA and CODEVIDA, Venezuela: Informe sobre el desarrollo a la salud 2014-2017, en un contexto humanitario de privación prolongada de medicinas y servicios sanitarios,(Venezuela: Report on health development, 2014-2017, in the humanitarian context of prolonged deprivation of medicines and health services) at: http://www.codevida.org/codevida/wp-content/uploads/Provea-y-Codevida-Informe-Derecho-a-la-Salud-CIDH-2017.doc. [in Spanish only]

In September 2017, the IACHR ordered precautionary measures to protect the life of a Venezuelan citizen with haemophilia A, on the grounds that the lack of prophylaxis and clotting factor was putting his life at serious risk 10. The Commission urged the state to ensure he received appropriate medical treatment.

According to UNAIDS, although the Venezuelan Health Ministry has provided free anti-retroviral therapy since 1999 to people living with HIV, the difficult economic climate is hampering the ability to buy and acquire medicines and supplies for testing for and preventing HIV. This has led to a shortage of anti-retroviral drugs and drugs to treat opportunistic infections, as well as male and female condoms and testing for HIV, CD4, viral load and drug resistance11.

IACHR, Precautionary Measure 309-17, at: http://www.oas.org/es/cidh/decisiones/pdf/2017/37-17MC309-17-VE.pdf [in Spanish only].
UNAIDS, Venezuela, Overview, at: http://www.unaids.org/en/regionscountries/countries/venezuela

People living with HIV who are not getting treatment in Venezuela, or whose state of health has been seriously impaired due to an increased viral load caused by the lack of drugs, are going to Colombia to try to escape these anxieties and find life-saving treatment.

In the department of Norte de Santander, the deaths of nine people from Venezuela from diseases related to HIV/AIDS were recorded in 2015; the equivalent figure for 2017 to the end of October was 26, an almost three-fold increase. Many people in Colombia turn to the legal provision known as the tutela 12 in order to get the judiciary to find in their favour and guarantee their right to health linked to the right to life. In relation to HIV and other diseases, in the Norte de Santander department there have been a total of 109 such cases that obliged the Norte de Santander Institute for Health to guarantee full treatment.

Article 86 of the Colombian Constitution guarantees the right of everyone in the country to initiate an action for protection (Acción de tutela). This provision establishes the right of every person to bring their case, at any time or in any place, before a judge and through preferential and prompt proceedings demand the immediate protection of their fundamental constitutional rights if they fear these may be violated by actions or omissions on the part of public officials or private individuals. 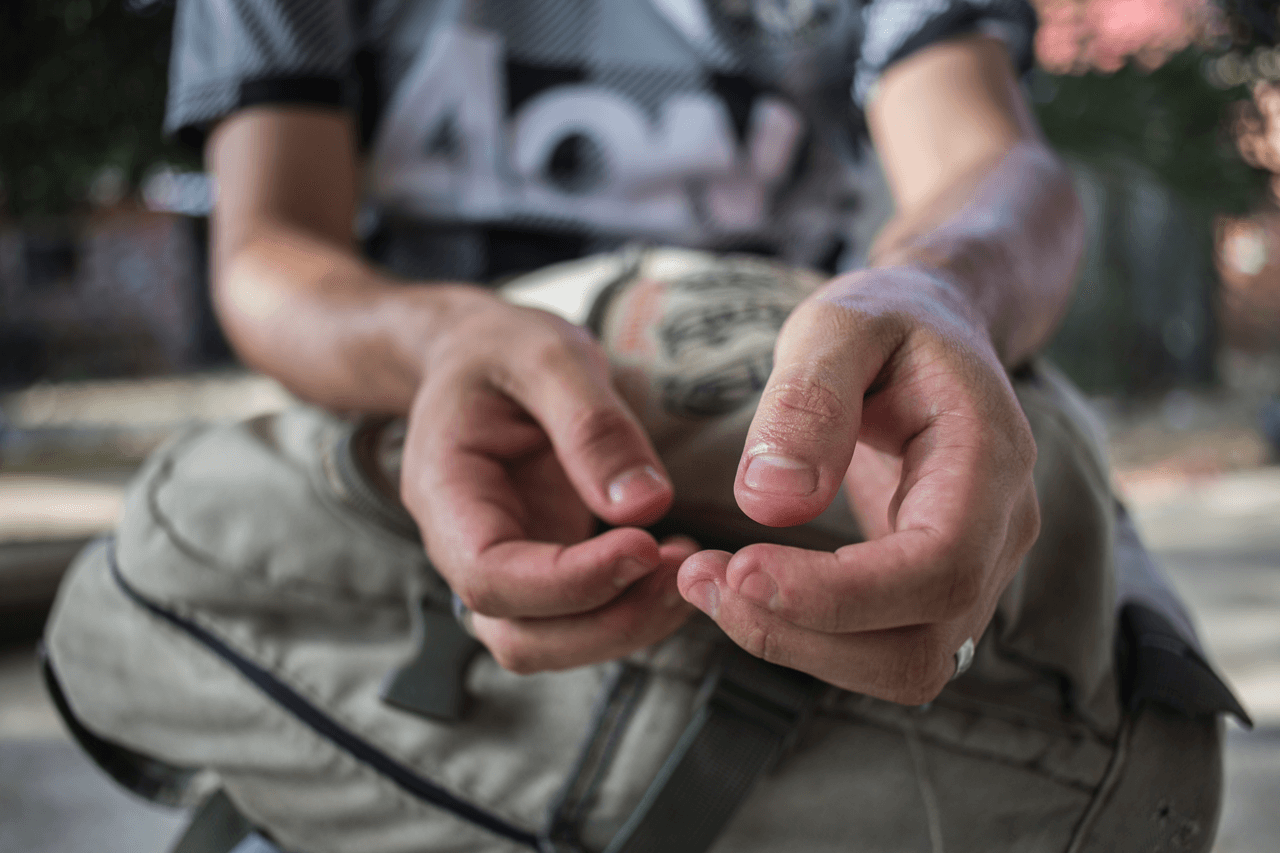 J. O., 25, arrived in Colombia a year and six months ago. He was diagnosed with HIV in March 2015 in San Cristobal, Táchira State where He had to bear the cost of the five exams he had to take. He indicated that in June 2015, the anti-retroviral drug that he was taking and had been provided by the San Cristobal Health Service, began to become scarce. From August 2015 to September 2016, it was not possible to carry out tests to check its viral load because He could not pay the price. His health deteriorated rapidly, losing 16 kilos in those 10 months. This led him to cross into Colombia in September 2016, for testing and treatment. Thanks to a favorable legal protection, he obtained access to complete medical treatment in Colombia.

Several Venezuelan civil society organizations reported that only 27% of pregnant women living with HIV had access anti-retrovirals to reduce the risk of mother-to-child transmission and there is a shortage of milk formula for babies of mothers living with HIV, as well as of contraceptives 13. 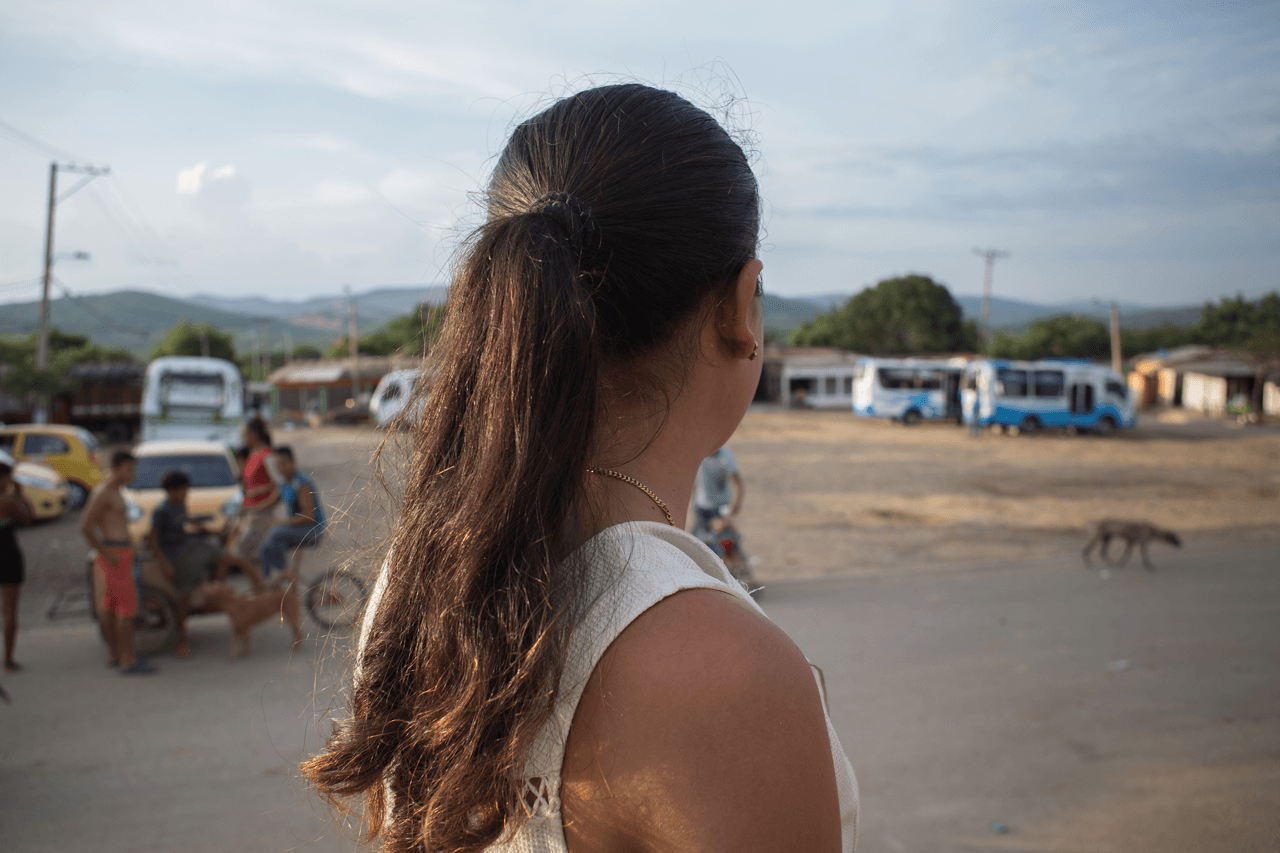 M. G., 20 years old, in a neighborhood in Cúcuta, Colombia. She crossed into Colombia in early 2017, because she could not feed her children of one and a half year and 6 months. Since She lives with HIV She cannot breastfeed, and depends on the purchase of dairy formula, scarce and unavailable in Venezuela. In her first pregnancy, she was informed that in order to be attended at birth, she had to buy a biosecurity kit on her own to avoid infection, which was almost non-existent in her country. Not being able to be treated in a hospital for not getting this kit, she had a natural delivery on her own, something that today, even though the baby was not infected, still generates a lot of pain in her. When she became pregnant of her second child, she crossed to Colombia, where she was assisted in delivery at the Erasmo Meoz Hospital in Cucuta.