Venezuela, considered for decades as a host country for migrants from various countries, has become a country with an ever increasing outflow of its population.

Specifically, the numbers of migrants and asylum-seekers from Venezuela recorded in 2017 were alarming. The Office of the UN High Commissioner for Refugees (UNHCR) reported in November 2017 that more than a million people had recently left the country and more than 133,000 has sought asylum in various countries over the previous four years1.

From 12 to 30 November 2017 Amnesty International conducted a fact-finding mission to Colombia. Researchers visited the bordering departments of La Guajira, Norte de Santander and Nariño, as well as Cundinamarca and Atlántico. Amnesty International obtained information about the "emergency exit" from Venezuela2 of thousands of people seeking to save their lives through access to health services in Colombia. In total, more than 80 interviews were conducted with officials, UN agencies, university clinics, civil society organizations, as well as migrants and people from Venezuela in need of international protection3.

According to information gathered by Amnesty International, the third reason why Venezuelans are leaving the country, after lack of food and employment, is the lack of essential medicines.

The lack of available and accessible essential medicines particularly impacts on patients with chronic conditions who need this treatment to survive (for example, cancer patients, people with kidney problems and diabetes, people living with HIV or haemophiliacs) and for whom denial of treatment means certain death in Venezuela4. This group of people, like many pregnant women, especially those with high-risk pregnancies, are forced to migrate as they see no other option to save their lives, even though Venezuela has a non-derogable obligation to guarantee their health care and treatment5.

UNHCR, Situation Update, Venezuela, 2018, at: https://data2.unhcr.org/en/situations/vensit
It is estimated that around 25% are Colombian families, compared to almost 75% Venezuelan or bi-national families. Meeting with UNHCR and OCHA, Colombia, November 2017.
In the department of Norte de Santander, Amnesty International met officials of Migración Colombia; medical staff and management of the Erasmo Meoz and Villa del Rosario Hospitals in Cúcuta; and representatives of the Colombian Institute for Family Welfare, of the Norte de Santander departmental CRUE (the body which regulates accident and emergency facilities), of Hermanos Scalabrinianos, of the Jesuit Refugee Service, of the organization Censurados and of the parish of San José, as well as World Food Programme, UNHCR, and OCHA staff. In La Guajira, Amnesty International met representatives of the Pastoral Social of Cáritas, World Food Programme staff, personnel from the public health department of Riohacha Hospital, medical staff and management at the Hospital Nuevo San José de Maicao, the Director of the Department of Health of La Guajira department, Migration Colombia staff and the La Guajira Regional Ombudsperson. In the Atlantic region, Amnesty International interviewed personnel from the Migration Programme of the University of Norte de Barranquilla. In the department of Nariño, Amnesty International met UNHCR and OHCHR personnel and representatives of Migración Colombia and Pastoral Social – Caritas. In Bogotá, Amnesty International met the Director of Migración Colombia, advisers at the Ministry of Health, officials of the Advisory Commission for the Determination of Refugee Status, the refuge programme of Social Pastoral – Caritas and the UNHCR office for Colombia and the Region. A total of 53 migrants and refugees from Venezuela were interviewed.
IACHR, Precautionary Measure 309-17, at: http://www.oas.org/es/cidh/decisiones/pdf/2017/37-17MC309-17-VE.pdf [in Spanish only]
Although in this report Amnesty International focuses on those who are chronically ill and pregnant women, elderly people, Indigenous people, people with disabilities, children and adolescents, are also at risk, as a result of this health crisis. 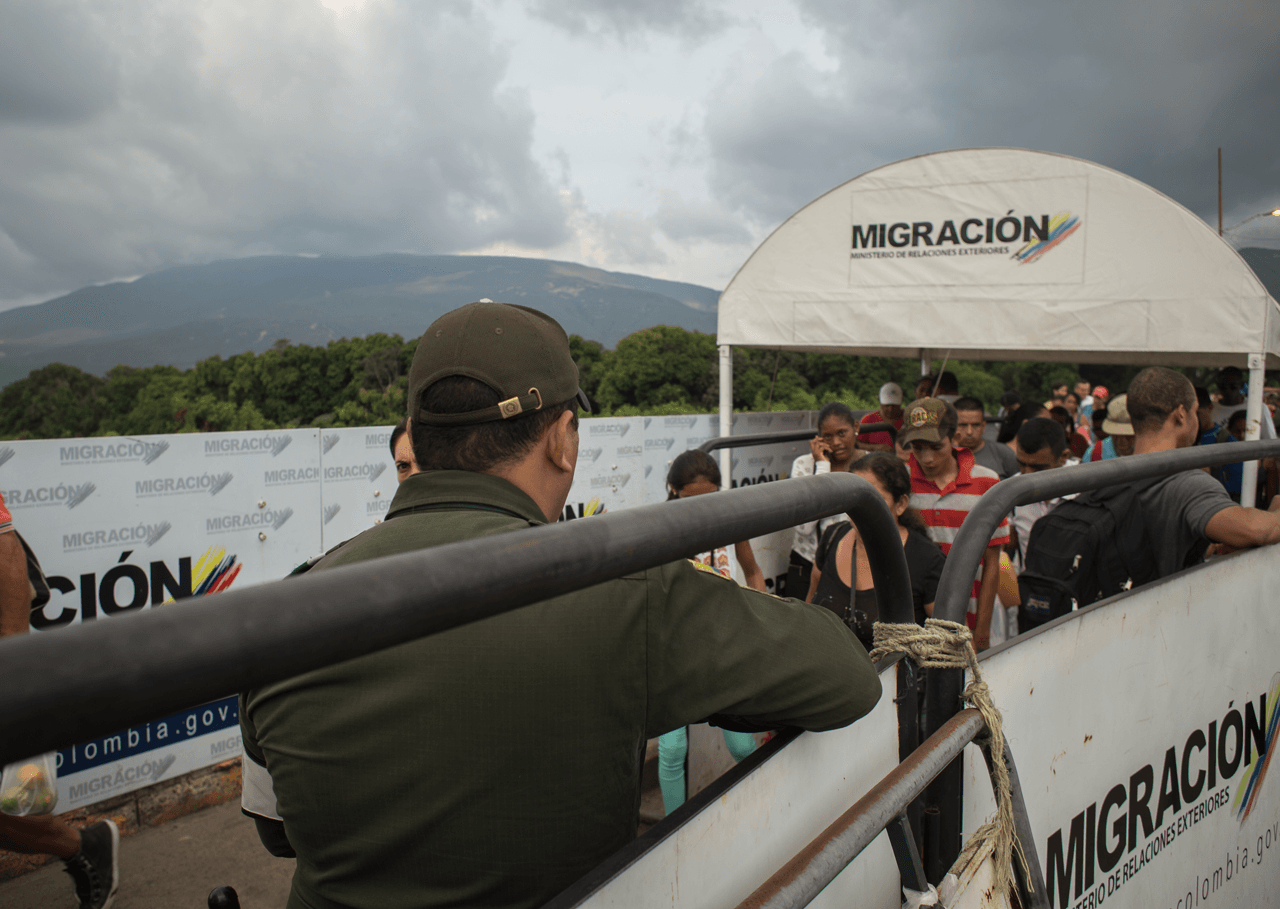 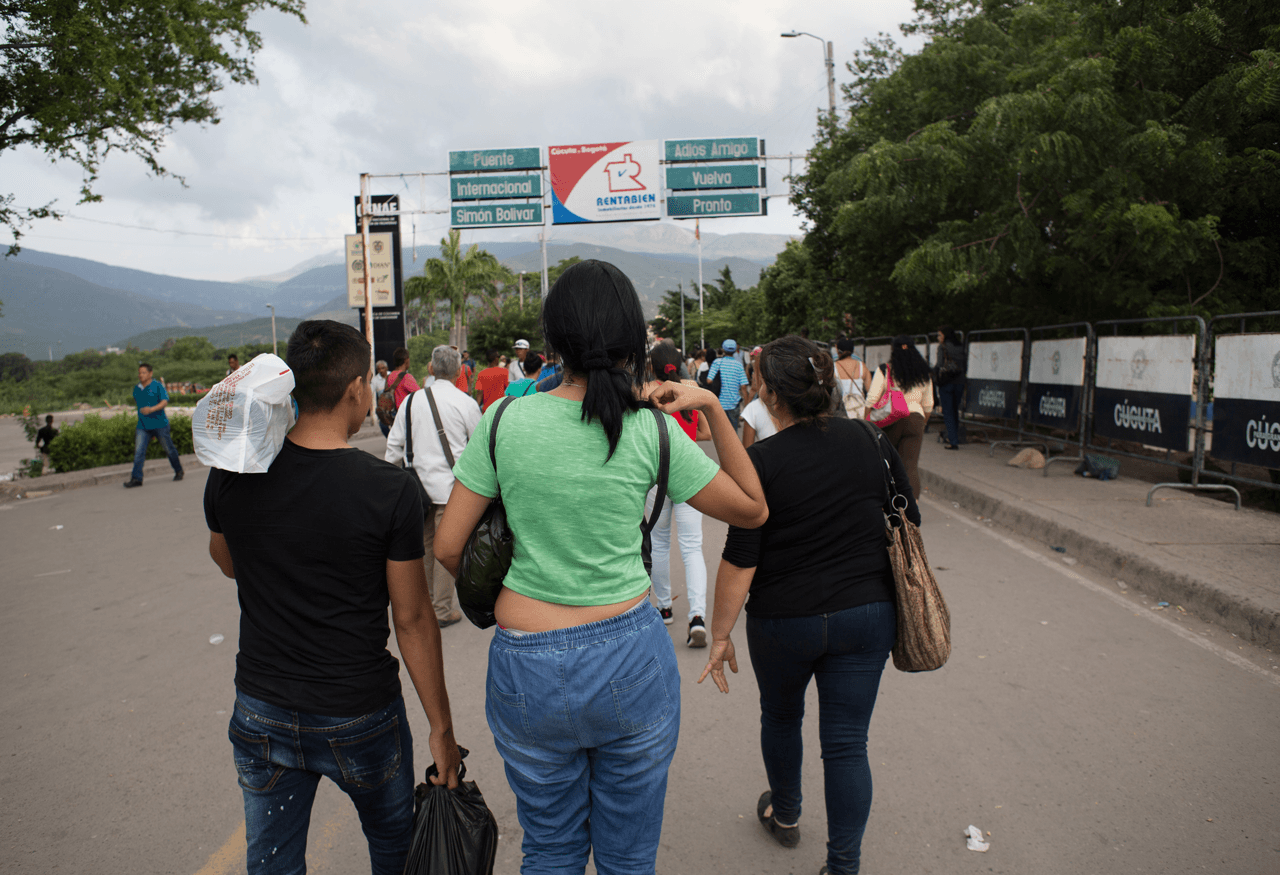 A family enters Cucuta, in northeastern Colombia, after crossing the checkpoints of the Simon Bolivar Bridge on the border with Venezuela. 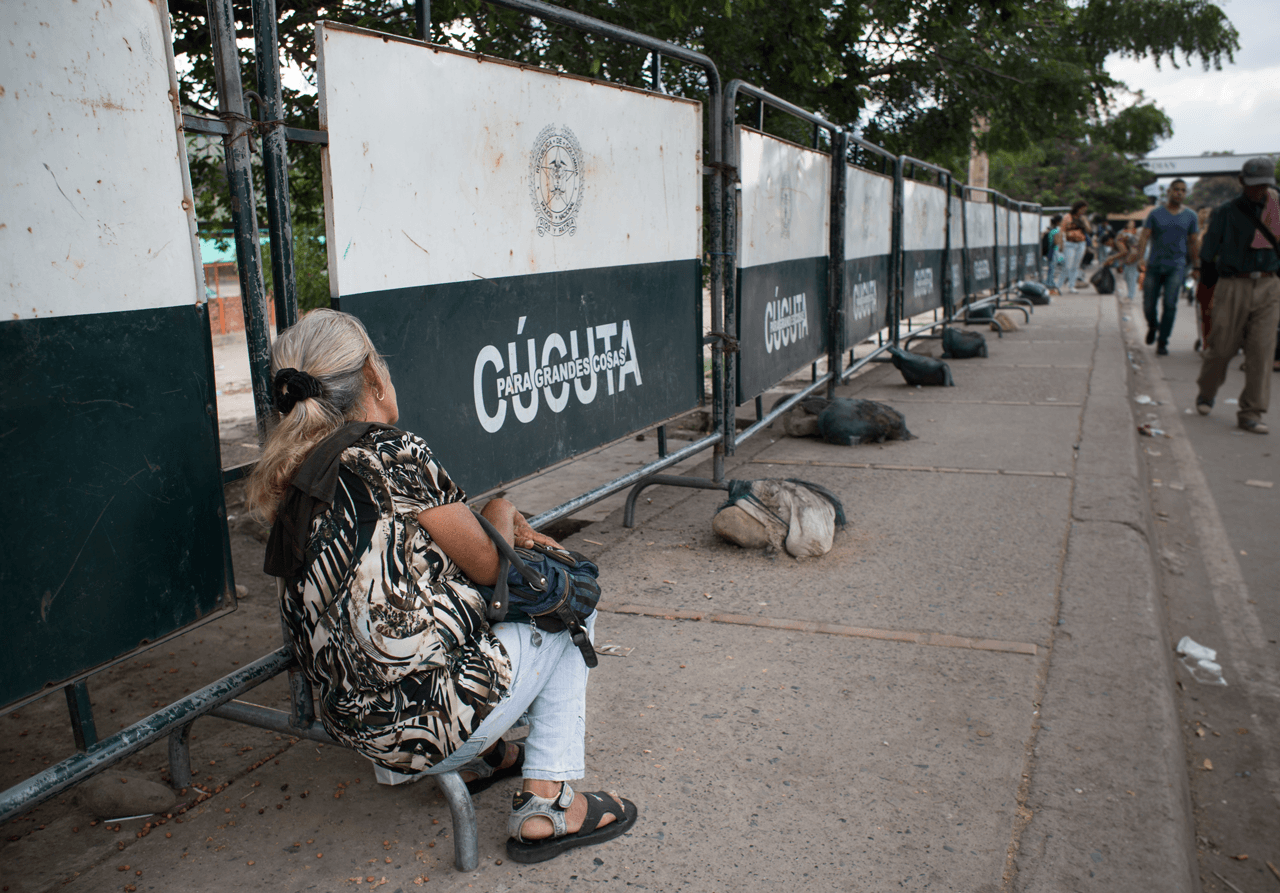 A woman rests beside the Simon Bolivar bridge that marks the border between Colombia and Venezuela.

Colombia has received more Venezuelans to date than any other country. The figures published by the Colombian government show that the number of Venezuelans in the country, in both regular and irregular situations, is 550,0006. However, international agencies and civil society organizations working in Colombia told Amnesty International that by the end of November 2017 there were possibly more than a million Venezuelans living in the country. Among them are people whose lives are at risk because of the lack of access to medical treatment necessary for their survival.

In Colombia, the universal right to receive basic medical care is regulated by Article 49 of the Constitution, and various laws and jurisprudence developed from it. This limits the right to emergency care in the case of foreign nationals7. Amnesty International was informed that during 2016, and to an even more alarming extent during 2017, the Colombian health system experienced instances of collapse, overload and lack of medical resources in some regions (mainly in border areas or cities with a high concentration of Venezuelan people) as a result of the large number of people from the neighbouring country who sought treatment by the emergency services8. 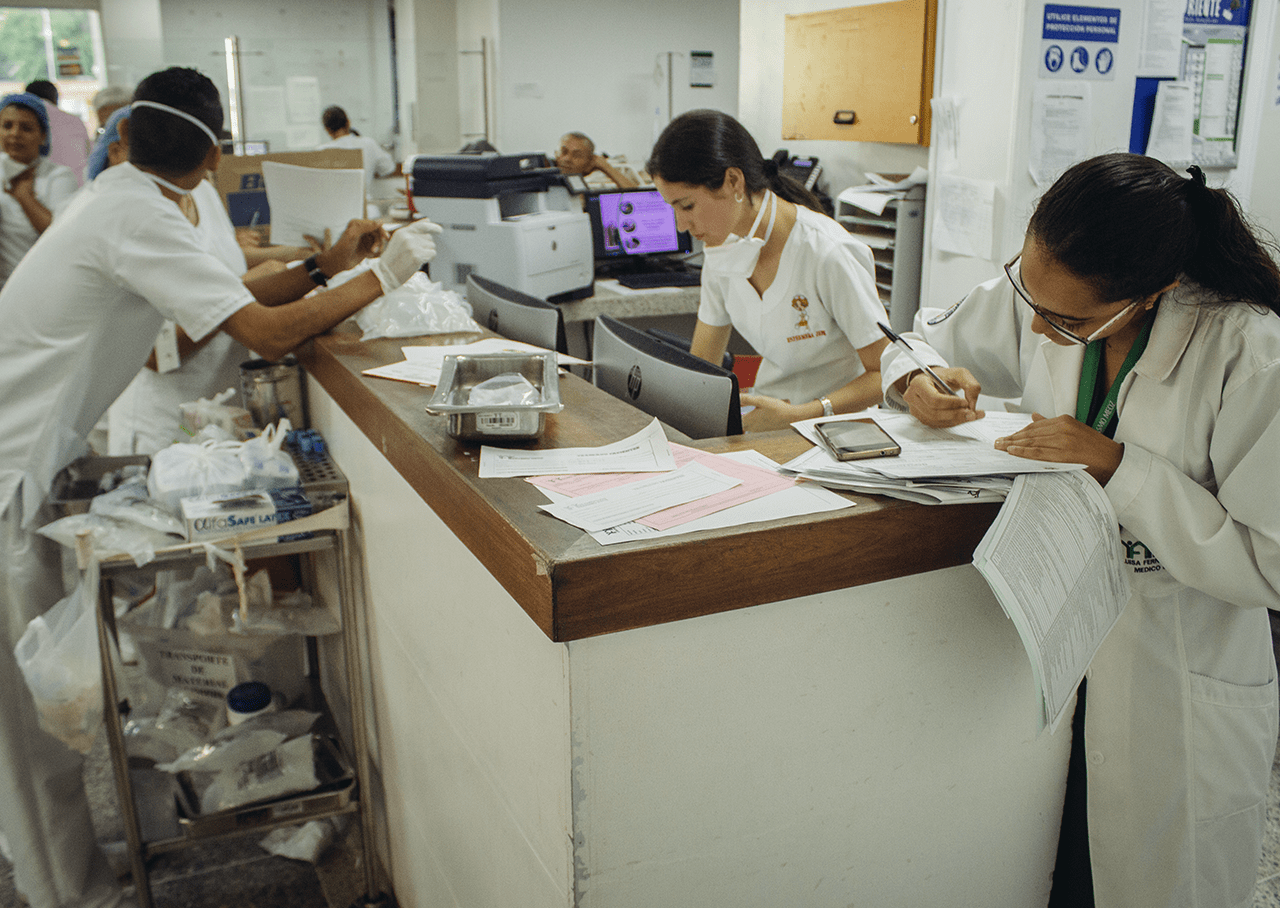 Medical staff in the afternoon shift of the Emergency Room at Erasmo Meoz Hospital in Cucuta, Colombia. 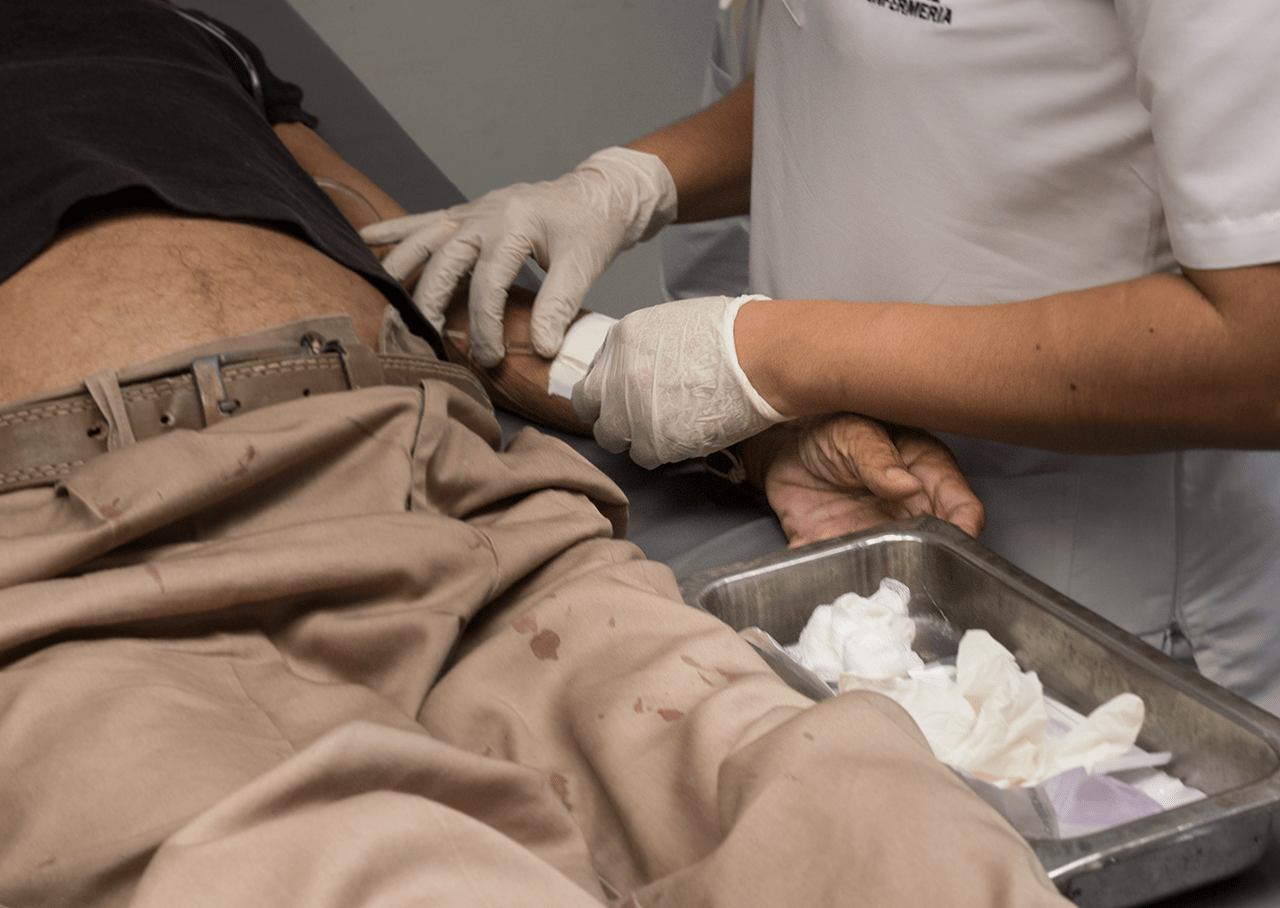 A man is treated in the Emergency Room at Erasmo Meoz Hospital in Cucuta, Colombia.

Pressure from medical associations and Colombian civil society organizations in response to the large influx of patients and the budgetary disruption faced by hospitals, mainly in the border areas, prompted the Colombian government to respond in mid-2017 by assigning additional funds, albeit in a very limited way.

The scale of the crisis in Venezuela is also reflected in the numbers of people seeking emergency health care in Colombia. According to the Colombian Ministry of Health, the number of Venezuelans treated in the country in 2015 was 1,475; by October 2017 this figure had risen to 18,298 I (a 12-fold increase). According to the latest reports, in 2017 the number of Venezuelans treated exceeded 24,720 (15 times more than in 2015)II. In other words, health services in Colombia registered a further increase in the number of patients from Venezuela in the last months of 2017III.

The figure given by the Colombian Ministry of Health as of 5 October 2017 is 16,904 (“Fenómeno migratorio y salud: desarrollos, tensiones y proyecciones”), while the Subdivision for Immigration Control put the figure on 30 October at 18,298 (Equipo Local de Coordinación de Norte de Santander, Contexto humanitario-Frontera Colombo-Venezolana, 2017).
Colombian Ministry of Health press statement, “El Gobierno Colombiano no tiene injerencia en el mercado de medicamentos con Venezuela”, (The Colombian Government has no involvement in the sale of medicines to Venezuela”) at: https://www.minsalud.gov.co/Paginas/El-Gobierno-colombiano-no-tiene-injerencia-en-el-mercado-de-medicamentos-con-Venezuela.aspx [in Spanish only].
Amnesty International, Interview with Colombian Ministry of Health officials, November 2017.

The department of Norte de Santander reported a total of 12,692 treatments provided to foreign nationals, mainly from Venezuela, up to November 2017, and the Erasmo Meoz Hospital alone, provided emergency treatment in 6,576 cases to a total of 5,856 Venezuelans during 2017VI. The previous year, this hospital provided 2,558 treatments to 2,294 people; in other words the number of treatments in was 2.5 times higher in 2017 as compared with 2016VII. By November 2017, the department of Atlántico, whose capital, Barranquilla, is one of the destination cities for country's Venezuelan population, had spent almost COP 5300 million (around US $1,800,000) on treating Venezuelan patients, providing 6,280 treatments to 4,411 VenezuelansVIII.

In the department of Antioquia, whose capital is the city of Medellín, medical appointments for Venezuelan patients went from 10 in 2016 to almost 300 in 2017IX.

On 21 November 2017, Amnesty International visited the paediatric emergency unit of the Erasmo Meoz Hospital in Cúcuta. Out of a total 19 infants who had been admitted, 13 were from Venezuela. They were suffering from conditions including: dengue fever, malaria and acute respiratory, digestive and kidney diseases.
Previous Next
Act now