Enduring Much just to Stay

While crossing overland to Colombia is the most feasible option for many Venezuelans, especially those with limited financial resources, sometimes their troubles do not end with the change of country. Using “trails” or routes to enter the country irregularly, the homelessness experienced by many, difficulties in getting access to employment or complex medical treatment, barriers to registering legally in the country and getting access to education of their children, the risk of being targeted by irregular armed groups, obstacles to accessing the asylum and refugee application system, and xenophobia – these are just some of the more serious problems facing the people from Venezuela who arrive in Colombia via the land border.

While the Colombian Migration Authority puts the figure at 550,0001, international agencies and civil society organizations working in Colombia, told Amnesty International that in late November 2017, there were possibly more than a million Venezuelans living regularly or irregularly in the country and that those most at risk (mostly those in an irregular situation) are concentrated in the border regions.

A total of 37,000 people are recorded as entering and 35,000 leaving each day across the Simón Bolívar Bridge alone; the bridge, which joins the two countries, is in Norte de Santander and is one of the main border crossings2. However, the figures given by Migración Colombia are only an estimate. Many of the other access and exit bridges, for example Rumichaca Bridge in Nariño and Paraguachón in La Guajira, have no system in place to count people arriving and leaving, which makes it impossible to know the exact number of people crossing through official routes. In addition, there are more than 250 "trails" or irregular access roads to along more than 2,200 kilometres of border, making it difficult to know the actual numbers of people entering and leaving Venezuela for Colombia and vice versa. Most of those interviewed by Amnesty International entered the country by irregular means and had not been able to regularize their situation. 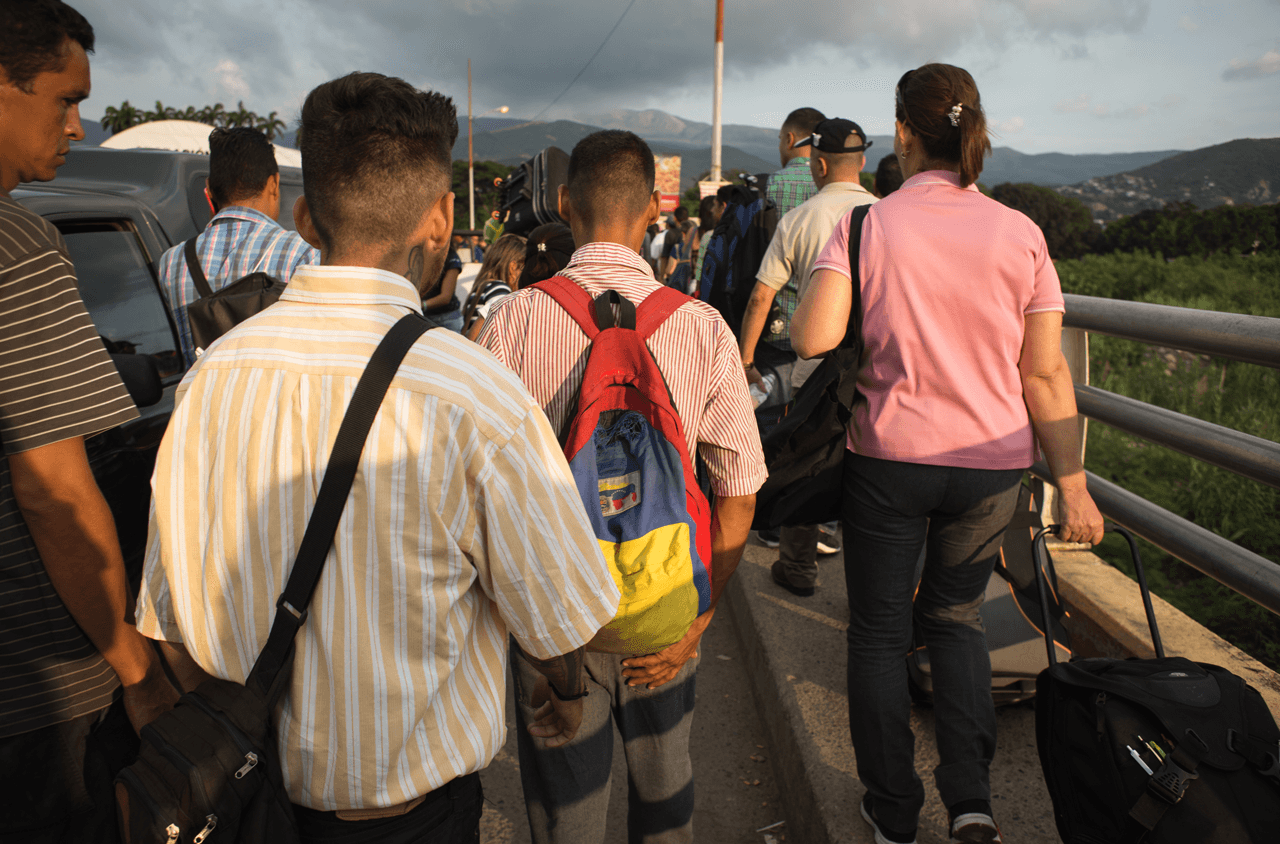 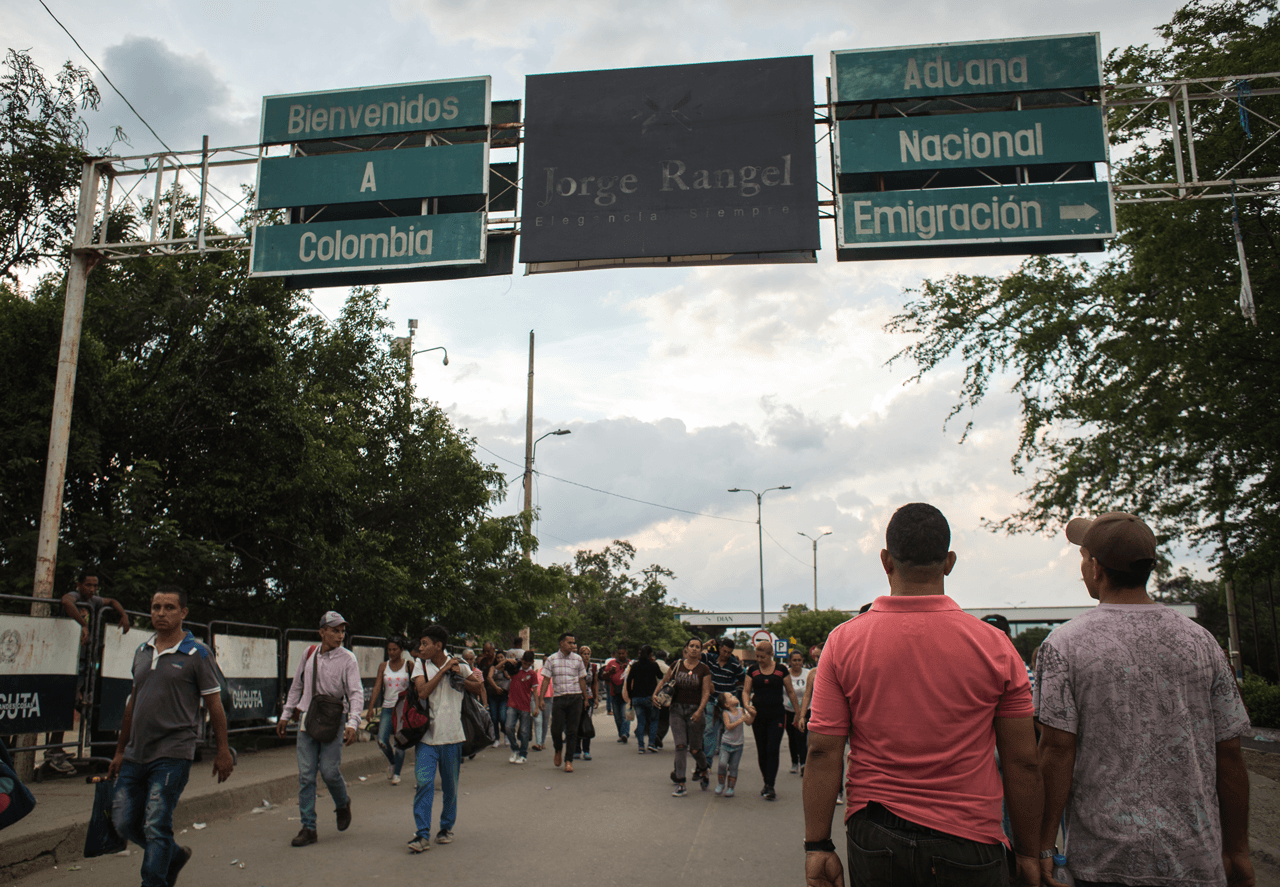 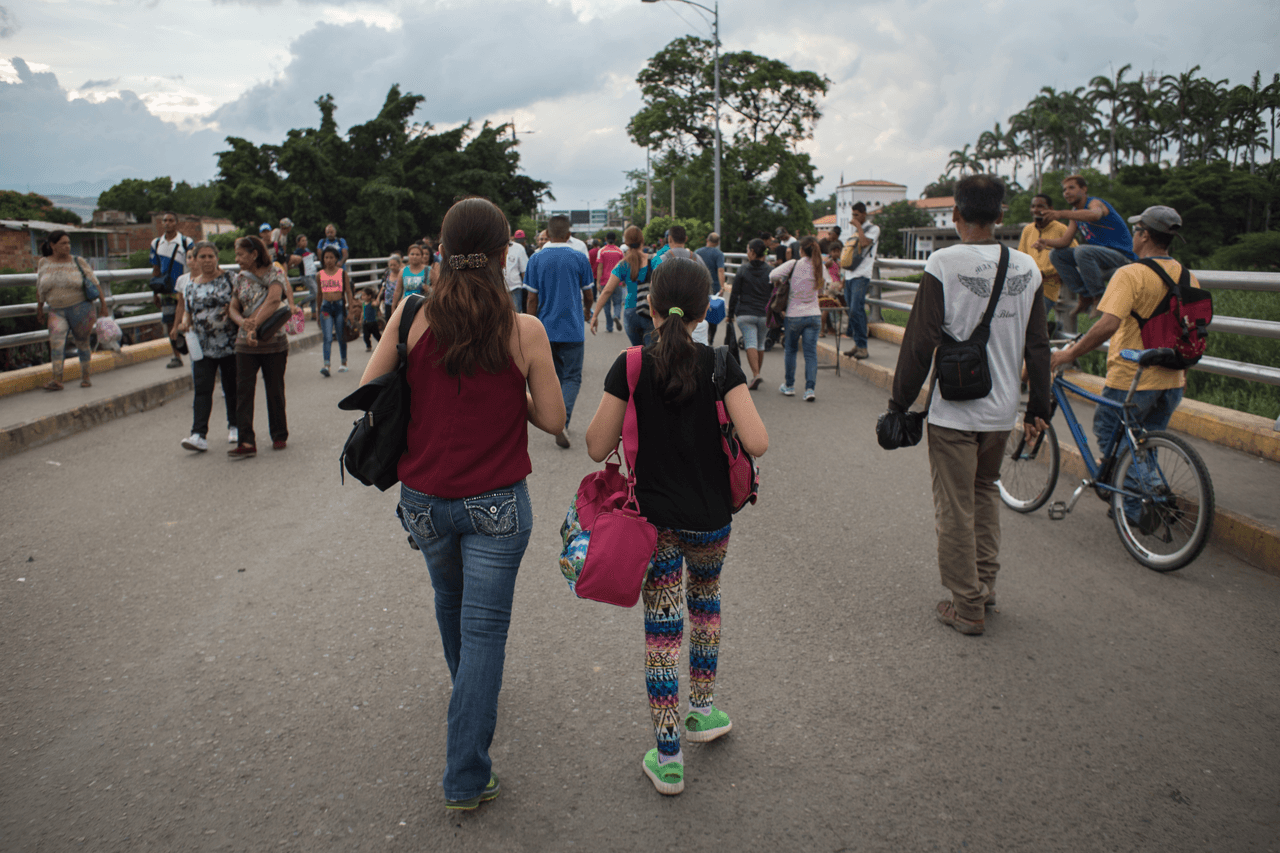 In Cucuta, a Colombian municipality of around 650,000 inhabitants, more than 22,000 people were reported to have arrived from Venezuela who intended to stay in the country during the first six months of 2017. By the end of 2017, this number had risen to more than 32,0003. Local organizations estimate that about 30% are in need of international protection4.

However, Colombia response in implementing comprehensive strategies for the reception and care of migrants and people in need of international protection has been limited. Certain pathways to ensuring support have been put in place – in health, education and immigration status regularization. However, the delayed and limited studies undertaken by the Colombian government to ascertain numbers involved, identify the profile of the people who are arriving, the reasons for their arrival and their protection needs have hindered analysis of the real situation, which would allow more detailed measures to be put in place depending on whether the person arriving is refugee, is in need of protection, is a migrant who is at risk, etc.

Colombia is second only to Chile as the country with the most "alternative legal stays" involving people coming from Venezuela5 through the Special Permanent Permit (Permiso Especial de Permanencia, PEP); in January 2018 the number of such stays recorded in Colombia was 69,0006.

The PEP, a measure created in mid-2017 in the context of the constant arrival of people from Venezuela, allows people to stay in the country legally for two years and is aimed at those who have entered the country with a passport which most of the people crossing into Colombia via the land borders cannot get as they are in the most vulnerable situations, many of these people without passports are still in need of international protection or refuge. Likewise, the Border Mobility Card (Tarjeta de Movilidad Fronteriza, TMF), granted to more than 1,300,000 Venezuelan citizens, was created in early 2017 to facilitate the purchase of supplies in Colombia in the border areas.

In February 2018, the Colombian government announced that only those with a properly stamped passport will be allowed access to the country and that the TMF will no longer be operational from April 2018. Amnesty International believes that this could aggravate the situation of those who depend on Colombia for their income and to access food and medicines, particularly those whose lives, liberty and safety are at risk because of the situation of massive human rights violations experienced in Venezuela; that is, refugees.

Despite the PEP and TMF measures, the use of irregular routes has been a constant factor in crossings from Venezuela to Colombia. The new measures announced by the Colombian government will result in more people resorting to clandestine routes, increasing the risks faced by thousands of people because of the control exercised along these routes by criminal groups responsible for extortion, assaults and forced recruitment7. Towards the end of 2017, at least 14 armed clashes were reported in La Parada, a settlement near the Simon Bolivar International Bridge8. According to information received by Amnesty International, members of the guerrilla group the Popular Liberation Army (Ejército Popular de Liberación, EPL) declared Venezuelan people in some municipalities in Norte de Santander to be "military targets"9, and there were reports that Venezuelans had been recruited by guerrillas of the National Liberation Army (Ejército de Liberación Nacional, ELN)10.

Local Coordination Team, Norte de Santander, Contexto humanitario-Frontera Colombo-Venezolana, 2017 (Humanitarian Context: Colombian-Venezuelan Border, 2017).
Interview with humanitarian personnel working in the border region of Colombia, November 2017.
UNHCR, Alternative Legal Stay, see: https://data2.unhcr.org/en/situations/vensit
Migración Colombia, Radiografía migratoria Colombia-Venezuela (X-ray migration: Colombia-Venezuela) 19 January 2018, at: http://www.migracioncolombia.gov.co/index.php/es/prensa/multimedia/6308-radiografia-de-venezolanos-en-colombia-31-12-2017 [in Spanish only].
Amnesty International documented the case of Gloria León, whose son, José Gregorio Uribe León, has been missing since 22 July 2017. He decided to cross via a path near the Francisco de Paula International Bridge, Ureña, because, unlike his mother, he did not have a Border Migration Card. Gloria waited for her son on the other side of the bridge and searched for him along the clandestine routes for days. Her son has not been seen since. A Colombian soldier who met her asking desperately about her son admitted that they had seen what they took to be a gang of criminals tie him up and take him away. Interview conducted by Amnesty International, Cúcuta, November 2017.
El Nacional, “Registran nuevo tiroteo en la frontera” (“Another exchange of fire reported on the border”) at: http://www.el-nacional.com/noticias/mundo/registran-nuevo-tiroteo-frontera-colombo-venezolana_207438 [in Spanish only].
Amnesty International, interview with OCHA staff, Cúcuta, November 2017.
CNN, “El ELN recluta a venezolanos dice Comandante de las Fuerzas Militares de Colombia” (“The ELN is recruiting Venezuelans says Commander of the Colombian Military Forces”) at: http://cnnespanol.cnn.com/2018/02/01/el-eln-recluta-venezolanos-y-sus-lideres-se-esconden-en-venezuela-dice-comandante-de-las-fuerzas-militares-de-colombia/ [in Spanish only]. 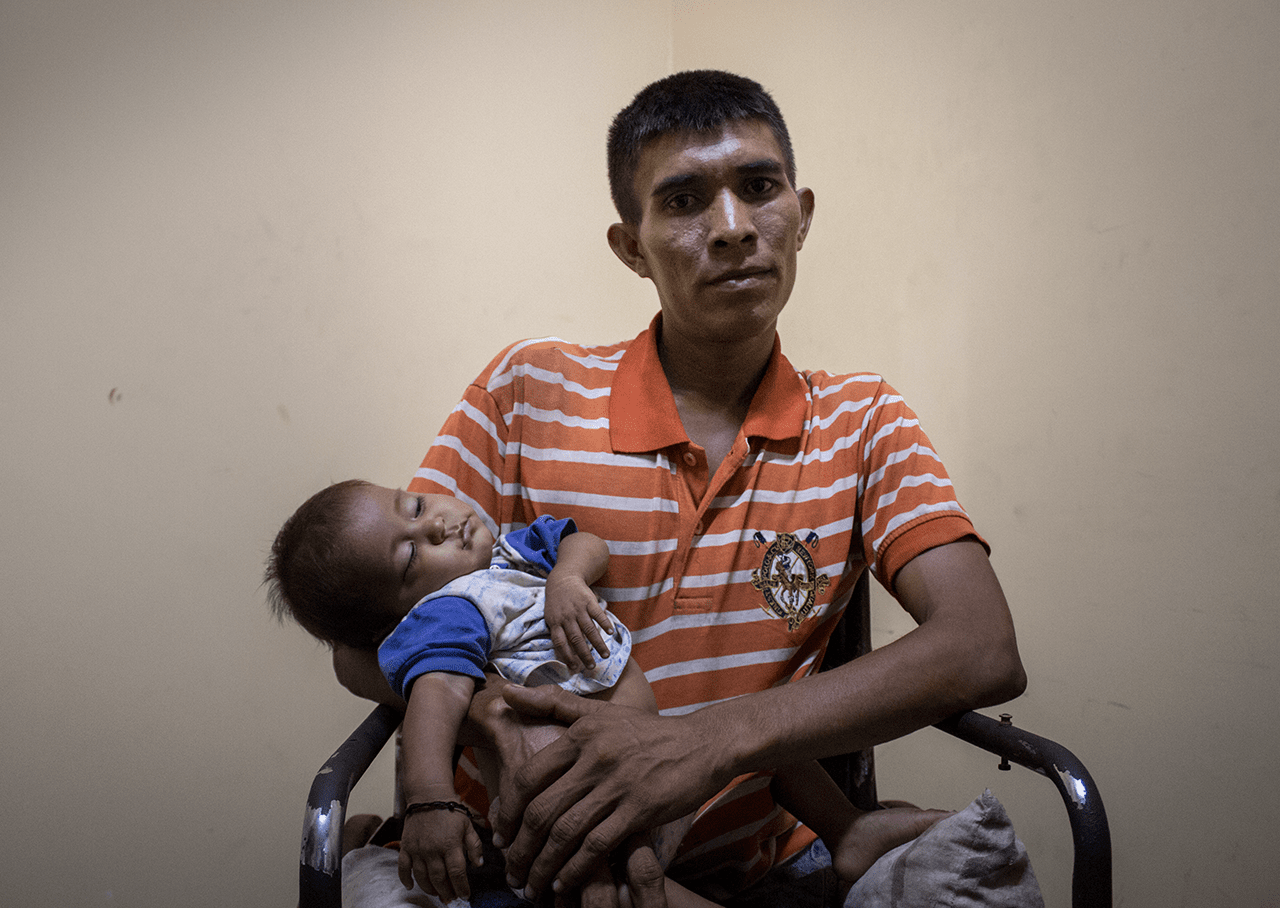 José del Carmen, 26, holds his 9-month-old daughter. A native of Zulia State, he has a physical disability that forces him to use a wheelchair. That was no obstacle for him to embark on the journey along one of the irregular trails of the crossing at La Guajira, along with his 18-year-old partner and his two daughters, aged two years and nine months, in November 2017. In the crossing, they had to pay 3.000 bolivares (US$ 0.12), to avoid being robbed or beaten by armed men who control irregular routes. José del Carmen remembered how a pregnant woman who was traveling in the same truck as them, was beaten several times by one of the armed men who controlled the road, with the butt of a rifle, for not having enough to pay the toll.

The damage to his spinal cord is reversible. However, both at the University Hospital "Dr. Pedro Emilio Carrillo" in the state of Trujillo in western Venezuela, and at the Dr. Manuel Noriega Trigo Hospital in the state of Zulia, he was told that they could not do anything for him due to the lack of supplies to carry out the operation he required. Six months after he left the hospital, his family could no longer bear hunger. His daughters would not stop crying and their bellies were swollen. Because of his opposition to the government, they were denied continued the governmental food plan for disadvantaged areas of the country (known as the "CLAP exchange"). José del Carmen lost more than 15 kilos, the health of the whole family was very deteriorated due to lack of food, and "they decided to cross". Another of José del Carmen's reasons to leave Venezuela is to be able to access the surgical operation elsewhere. The Caritas-Pastoral social organization welcomed them in the only shelter in Maicao.

Not everyone is lucky enough to have a roof over their heads. Hundreds of people sleep in public squares, parks or bus terminals in various Colombian cities because they do not have money to pay rent. Religious organizations have taken a leading role in ensuring that a dignified space and food are offered to many migrants and asylum-seekers arriving from Venezuela in a desperate situation. However, these private centres have limited capacity and most of the people who arrive are forced to sleep in public spaces in the open air, in insanitary conditions and at risk of being attacked, among them pregnant and nursing women11, with all the risks to their health that this entails. At the end of 2017 there were reports of tensions in the city of Cucuta because a local sports pitch had been occupied by around 900 people from Venezuela. They were evicted by the police12, a measure that far from resolving the problem, moved it from one community to another.

During November 2017 Amnesty International met Social Care (Pastoral Social) personnel in Maicao, Riohacha and Bogotá and visited the shelter they manage in Maicao. Amnesty International also visited the Hermanos Scalabrinianos hostel in Cúcuta and met the Jesuit Refugee Service, one of the organizations that run programmes to offer comprehensive protection to pregnant women from Venezuela.
El País, “Desalojan a venezolanos del barrio de Cúcuta” (“Venezuelans evicted from Cúcuta neighbourhood”) at: http://www.elpais.com.co/colombia/desalojan-a-venezolanos-alojados-en-parque-de-un-barrio-en-cucuta.html [in Spanish only]. 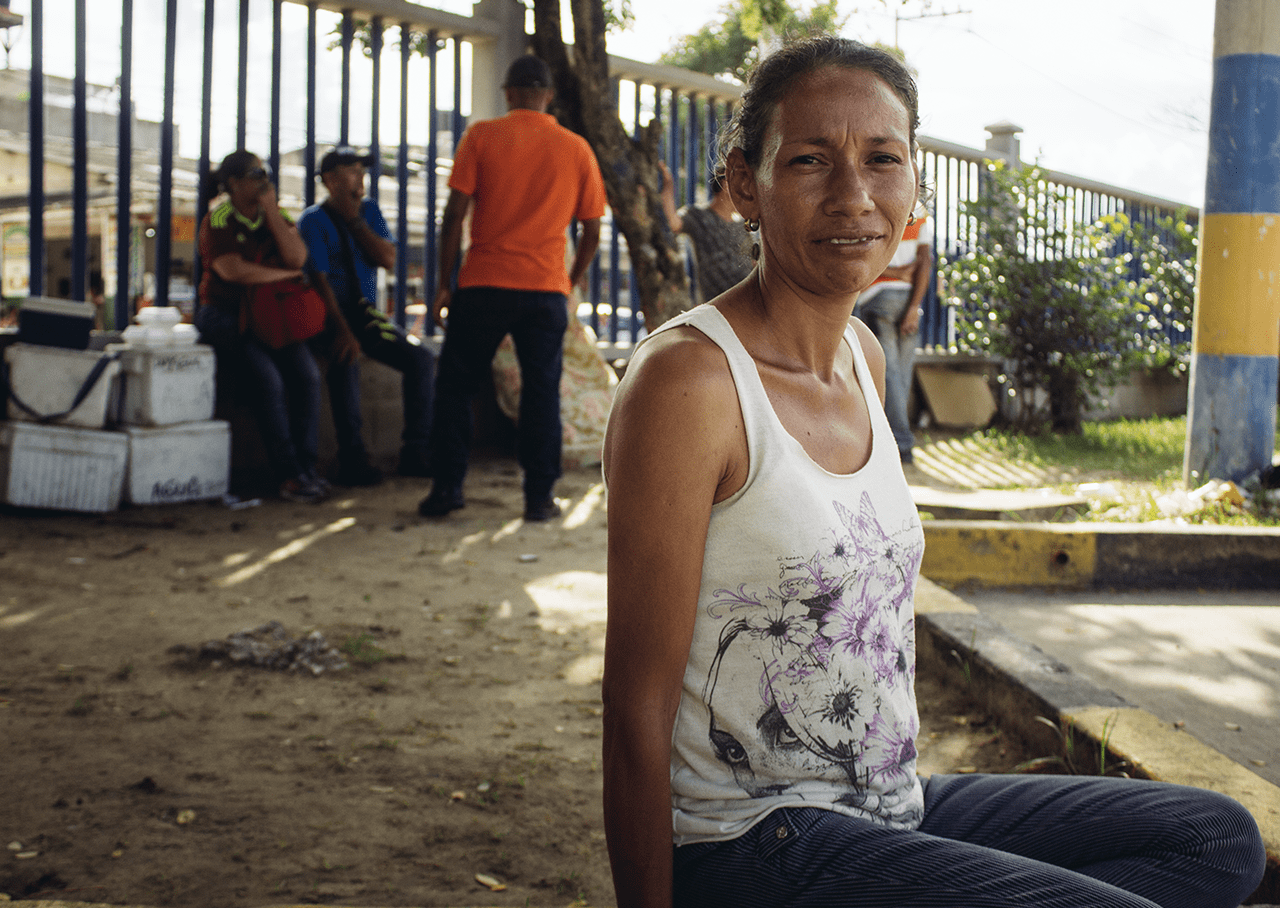 Dulce Turizo, 36 years old and two and a half months pregnant, was extorted by the Venezuelan guard before she entered the border checkpoint of Paraguachon, La Guajira, in September 2017. They left her with practically nothing. Since then she has had to sleep on the streets of Maicao and then in the parking lot of the bus terminal in Barranquilla, something she knows, exposes her to health and pregnancy risks. She receives food from religious groups, which arrive at the terminal every day to serve Venezuelan migrants and refugees. She went to the Hospital of Villa del Rosario for a check-up, but was informed that they only provide emergency service to foreign people, so she hopes to save money to pay for her check-ups. 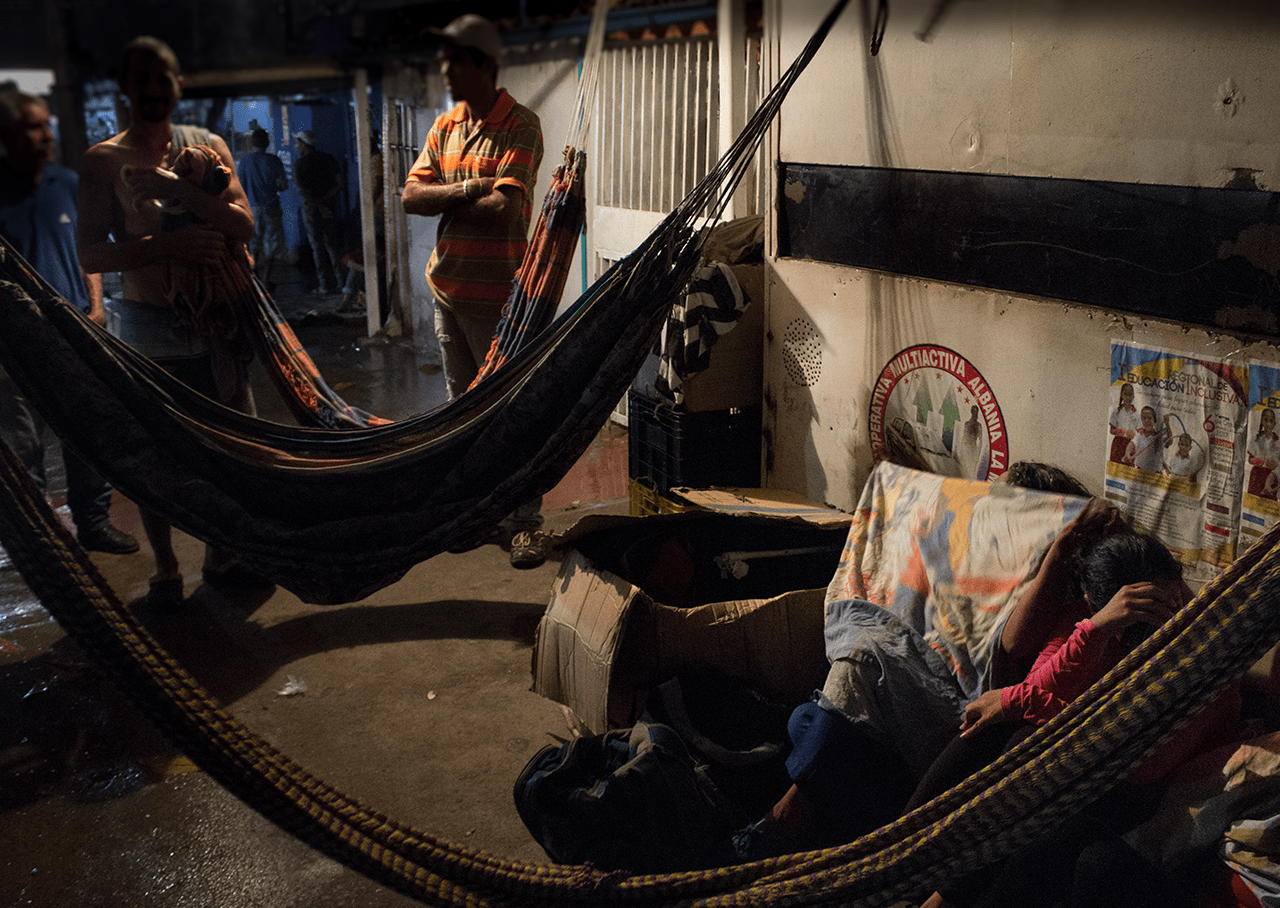 A group of Venezuelans look for a place to shelter themselves on a rainy night near a park in Riohacha, Colombia. 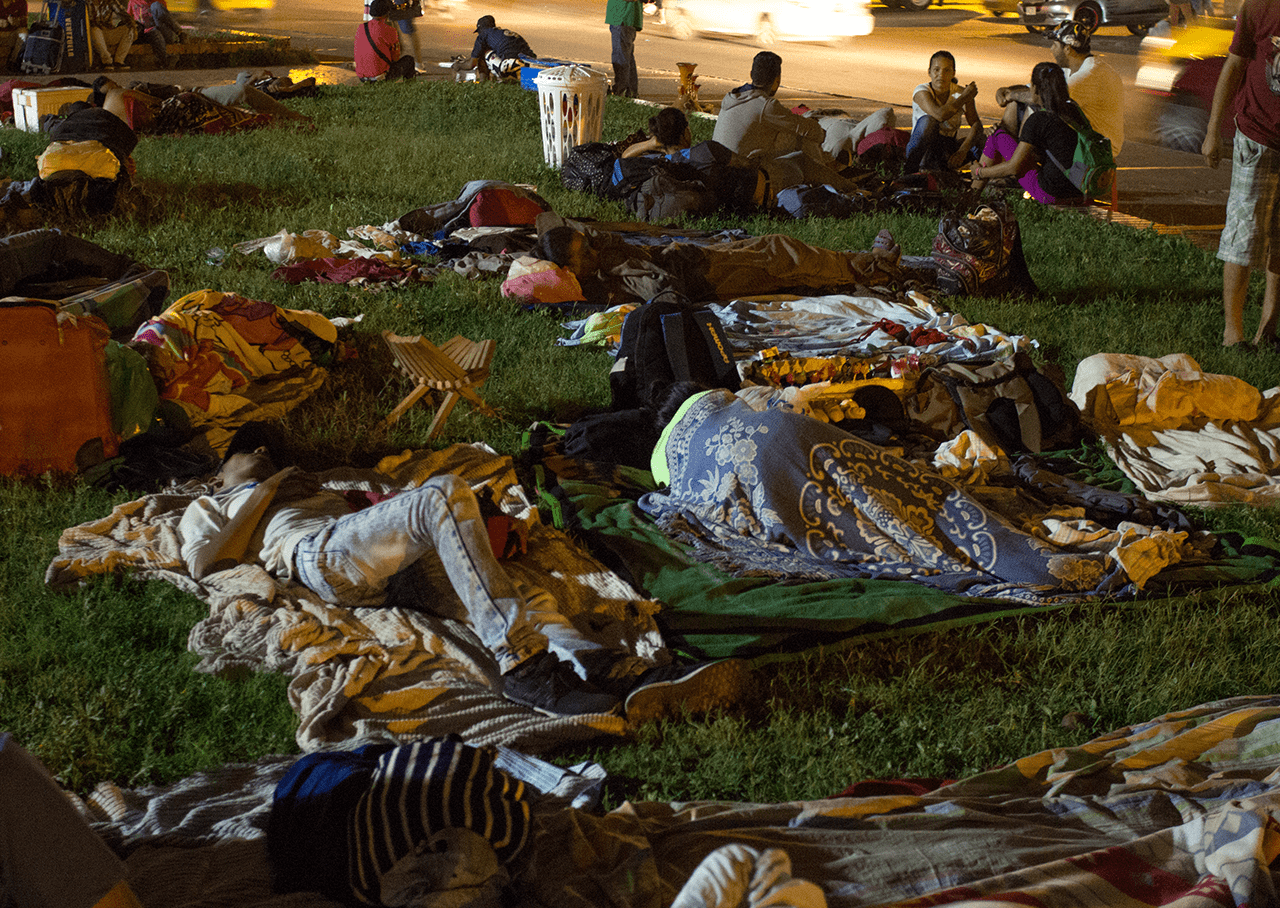 A group of Venezuelas look for a place to sleep in a park in Cúcuta, Colombia.