In its recent report, the UN Food and Agriculture Organization (FAO), in collaboration with the Pan American Health Organization (PAHO), pointed out that despite the progress Venezuela had made in recent decades in reducing maternal mortality, in 2016 the figures reverted to 1990 levels. In other words, in spite of almost 20 years of progress, there has been a serious regression in relation to maternal health and mortality1.

This drastic increase is reflected in the latest figures from the Venezuelan Ministry of Health's 2016 Epidemiological Bulletin which indicate that the total number of maternal deaths in the 2016 exceeded the 2015 figure by 65.79% (while infant deaths of children under the age of one increased by 30% compared to the previous year)X.

The majority of pregnant women interviewed by Amnesty International came from the border state of Zulia and Carabobo State in Venezuela, two areas with the highest rates of maternal and infant mortalityXI.

FAO, PAHO and WHO, 2017 Panorama of food and nutrition security in Latin America and the Caribbean, at: http://www.fao.org/3/a-i7914e.pdf
PAHO, WHO-PAHO, 2017 Edition, Health in the Americas – Summary: Regional Outlook and Country Profiles, at: http://www.paho.org/salud-en-las-americas-2017/wp-content/uploads/2017/09/Print-Version-ENGLISH.pdf
UNFPA, State of World Population 2017, at: https://www.unfpa.org/swop
CONVITE, Informe Análisis sobre las cifras de Mortalidad Materna e Infantil 2016 (Analysis Report on Maternal and Child Mortality Figures 2016), at: https://conviteblog.wordpress.com/2016/07/19/ultima-hora-informe-analisis-sobre-cifras-de-mortalidad-materna-e-infantil-en-venezuela-julio-2016/ [in Spanish only].
Venezuelan Ministry of People's Power for Health Epidemiological Bulletin, epidemiological week no. 52, 2016.
Amnesty International. Interviews with Venezuela pregnant and nursing women made from 13 to 30 November, 2017 in Colombia.

In the Colombian cities of Maicao and Cúcuta, two of the border cities with the largest influx of Venezuelan people, the number of medical appointments for pregnant women has reached unprecedented levels, taking into account that the number of pregnant women recorded before 2016 was much lower, and in 2015 practically nil5.

The following figures reveal not only a dramatic increase in the treatment of pregnant women from Venezuela in Colombia during 2017, but a gradual increase followed by a significantly higher figures towards the end of 2017. This reflects the worsening of the crisis in Venezuela (resulting in a greater number of people leaving the country) and the progressive deterioration of its health care system.

Amnesty International, Interviews with medical staff and health officials from the departments of Guajira and Norte de Santander, in November 2017, as well as comparative figures from the department of Atlántico drawn from Ref: 20180920003601 of 31 January 2018.

The reason for this phenomenon (the "exodus" of pregnant women seeking health care in Colombia) is that pregnant women in Venezuela are afraid they will die during labour or that they will experience pregnancy-related complications resulting in miscarriage, or both. In practically all the cases of which Amnesty International is aware, Venezuelan medical personnel asked the patient to pay for all the medical equipment, supplies and medicines necessary for the birth. In addition, the lack of available and affordable medicines needed to treat complications during pregnancy or delivery, such as antibiotics or anticoagulants; the near impossibility of obtaining prenatal vitamin supplements; or the lack of medical formulas for infants living with HIV, have forced many pregnant women to leave Venezuela, many in dangerous conditions, to ensure a safe pregnancy and delivery. 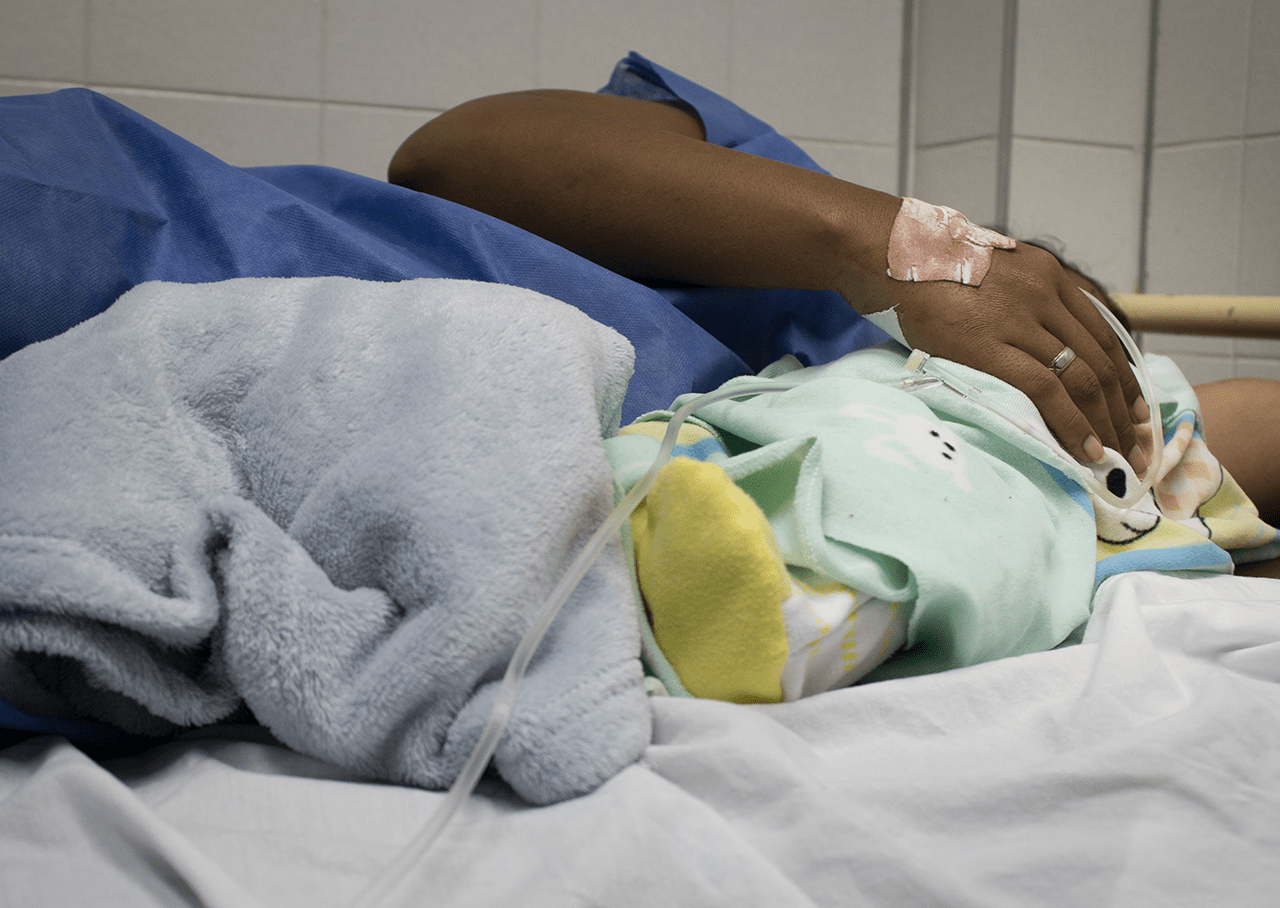 L.P. A few hours after giving birth. She came to Colombia for fear of losing her baby. Months earlier, in another pregnancy, she gave birth in a hospital in her native state of Zulia, Venezuela, but a dead baby was given to her with no explanation. L.P. she felt ill-treated, she says it traumatizes her to remember that day when she passed out for several hours. 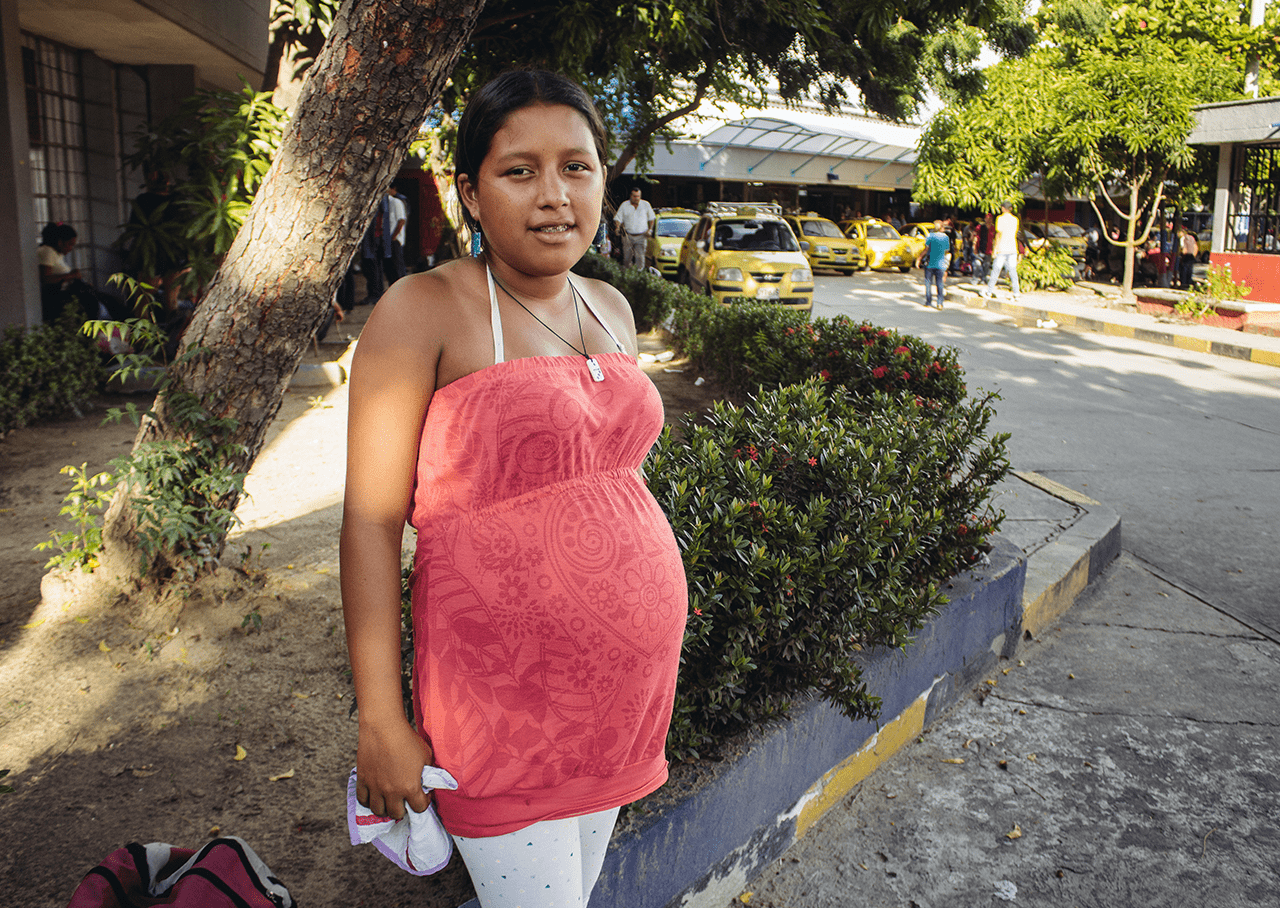 Michelle Chirino, 18 years old and 7 months pregnant, has been living with her family for several months in the parking lot of the bus terminal in Barranquilla, waiting to give birth in Colombia. In July 2017, 5 months into her first pregnancy, she began to lose amniotic fluid due to a urinary tract infection. At the Public Hospital of Coro, in the northwest of the country, they had no antibiotics, and they prescribed a medicine for her to buy it on her own. However, She never found the medicine. The next day, she returned to the hospital with severe pain and the loss of amniotic fluid continued. Doctors told her that she had to have an abortion, since the fetus was not viable. Michelle said that this had not been the only painful experience in the family. Almost at the same time, one of her sisters gave birth in the same hospital, but the newborn died minutes later. For her sister's cesarean section, she recalls that they had to buy gloves, suture thread, surgical needle, painkillers, healing, serum, gauze, epidurals and a long list of supplies and medicines needed for delivery, as there was nothing available to the patients in the hospital, which was very expensive for the family. 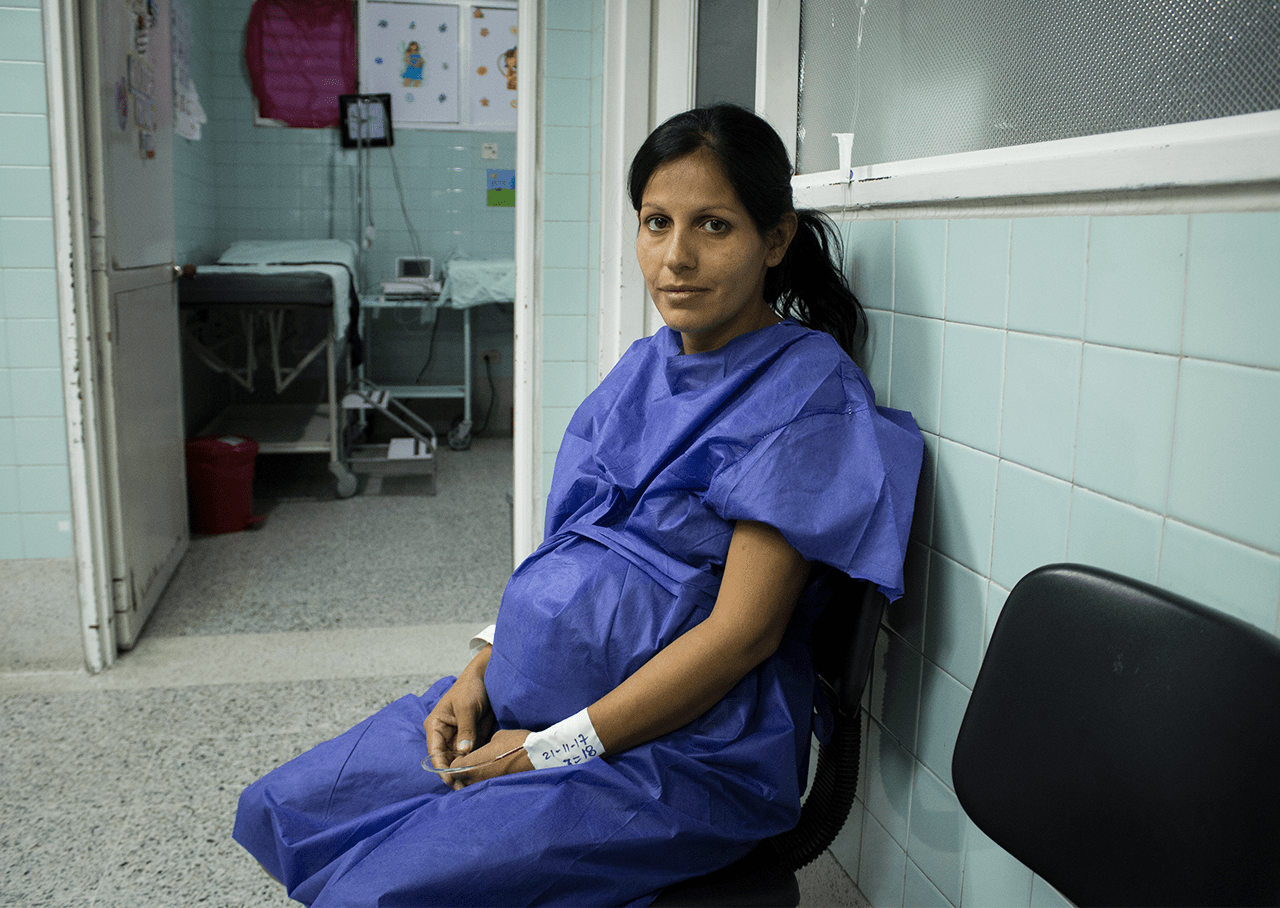 Karen, 31 years, says that doctors in Venezuela have to "work with their 'bare hands'" and that she was pregnant because the contraceptive pills she bought in a pharmacy in Venezuela had expired. She explained that because of the shortages, sometimes the condition of the few products that you can find is poor. 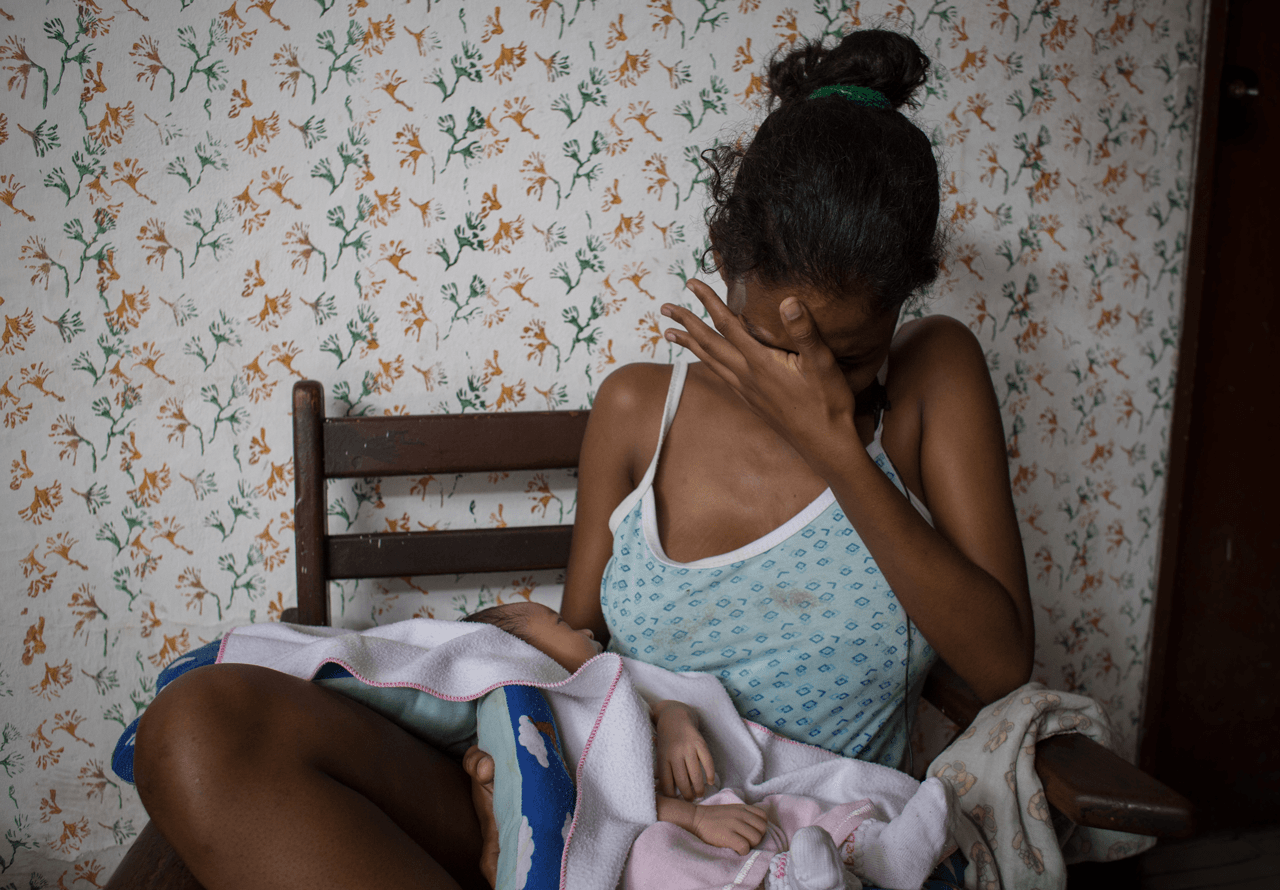 Ana Madriz, 23, gave birth in November 2017 at the Erasmo Meoz Hospital in Cucuta. She said that knowing she was pregnant with her second child, she decided not to return home because one of her best friends had recently died giving birth in Venezuela. Her friend's family members explained that due to malpractice, she contracted an infection and suffered a hemorrhage, which she might have overcome if the medical team had medication to treat her. For this reason, Ana was afraid of having a loss or risking her own life, and decided to leave everything behind so that her daughter, born safely in Colombia.

Kelly Rincon Palmar, a 19-year-old pregnant woman, was interviewed in Maicao Hospital. She had crossed the border into Colombia a week before her due date because in Venezuela she could not find the antibiotics for the severe urinary tract infection she had. The day after she crossed the border, she had to be admitted as an emergency to the New San José Hospital in Maicao where she received urgent treatment for five days.

Maritza Rodríguez is 28 years old and five months pregnant. While at the Erasmo Meoz Hospital in Cucuta, she described to Amnesty International how she had contracted a urinary tract infection and went to several hospitals trying to get treatment. When she arrived at the Central Hospital in Carabobo (Dr Enrique Tejera Hospital) she was astonished at its state of collapse and lack of cleanliness. Because they did not have any antibiotics, they referred her to Maternidad del Sur, also in Valencia, Carabobo, but they told her they did not have any either and they also told her that on the day of delivery she had to bring, among other things, gowns and gloves for the medical staff and antibiotics. She was forced to leave for Colombia urgently because of the danger posed by the infection because she could not find the medication she needed.